The Crime Of Resisting Arrest In Kentucky 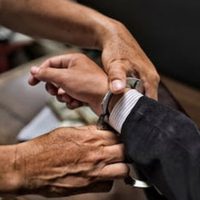 If you’ve been charged with resisting arrest in Kentucky, contact a skilled defense attorney as soon as possible. An attorney can help you fight the resisting arrest charge and the other criminal charge that led to the arrest.

The following is some more crucial information on the crime of resisting arrest in Kentucky.

What Constitutes Resisting Arrest in Kentucky?

Usually, it is up to an arresting officer and the judge to interpret whether an action constitutes resisting. However, the following are some common behaviors that constitute resisting arrest;

Penalties for Resisting Arrest in Kentucky

It is crucial to note that some behaviors can result in more serious charges. For example, if an individual is violent towards an officer, they may be charged with a felony.

Refusing to Answer Police Questions Is Not Resisting Arrest

It is crucial to note that refusing to answer police questions does not necessarily constitute a resisting arrest offense. For example, you do not commit an offense of resisting arrest when you choose to remain silent when being questioned and wait for your attorney to arrive. You have the right to remain silent. You do not have to respond to police questions without your attorney present, even after an arrest. In fact, it is best that you avoid answering police questions after an arrest without your defense attorney present.

If you are being faced with a criminal charge in Kentucky, including the criminal charge of resisting arrest, contact an experienced London criminal defense attorney at Cessna & George Law Firm today.

By Cessna and George Law Firm | Posted on May 17, 2022
« Loss Of Consortium In Personal Injury And Wrongful Death Actions
Aggravated DUI In Kentucky »